The audio industry is constantly evolving, so it came as no surprise that within my first few hours of show coverage, I began to notice that a number of companies are currently offering analog preamps. This trend involves the integration of an analog preamp and a digital-to-analog converter (DAC). With the demand for computer-based audio products growing exponentially over the past few years, I am surprised that it took this long for a product like this to really catch on. That being said, I think this could be a turning point in the industry, as the combination of these two products not only saves space, but it also reduces the complexity and cost of an audio system. 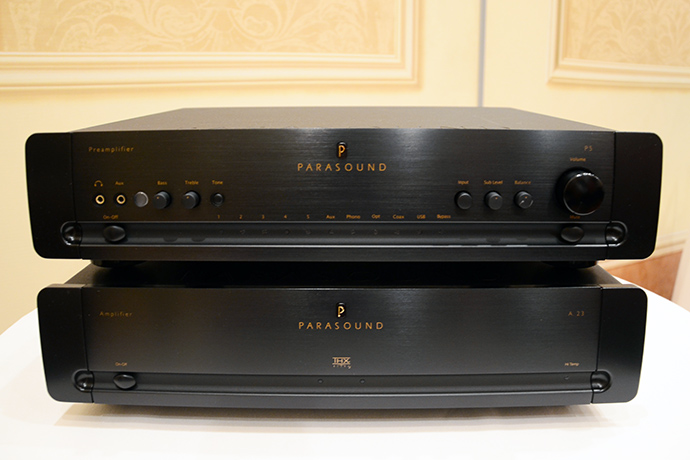 One company that recognizes opportunity when it comes knocking is Parasound. Posing what I think might turn out to be one of the best values on the market is Parasound's new Halo P5 (top piece in photo above), priced at $1400. Available "before spring of 2013" in both silver or a new matte-black finish, the P5 offers a host of features in a budget-friendly package. The P5 has six unbalanced inputs (including phono), one balanced input, single-ended and balanced outputs, and dual single-ended subwoofer outputs. There are also three digital inputs (optical, coax, and asynchronous 24-bit/192kHz USB), which access an onboard DAC that's said to offer "higher levels of performance than currently offered by the Zdac." The P5 also handles bass management by offering dedicated high- and low-pass crossover networks for both the main left and right channels, as well as both subwoofers. There are dials on the rear panel for manual fine-tuning of each crossover. 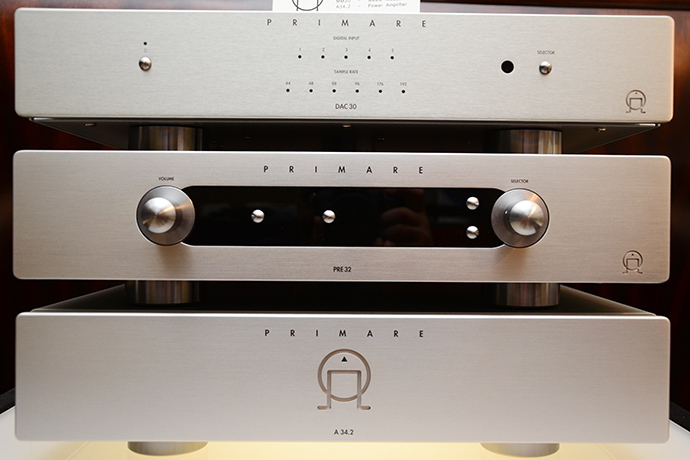 Primare also stepped up to the plate, showcasing their new "mediaboard"-equipped Pre32 preamplifier (middle component in photo above) for $4250 ($2500 without mediaboard). As the Pre32 is a balanced-design preamplifier, there are two pairs of low-noise balanced XLR inputs, as well as four pairs of unbalanced RCA inputs. There is also an RS232 input, a singular trigger input, and an IR input. Primare has thoughtfully included two pairs of unbalanced outputs, in addition to a single pair of balanced outputs. When ordered with the new mediaboard, the Pre32 gains a very high-end 24-bit/192kHz DAC section, which is made in-house, as well as the ability to stream music files from the Internet, a NAS, or a PC using any of its three digital connections (TosLink, coax, or USB). The casework is the same sturdy aluminum chassis that Primare uses for the standard Pre32, but with some added functionality to the menu. Should you currently own a Primare I32 integrated amplifier, or a P32 without a mediaboard, you can have your unit upgraded to include this new streaming mediaboard and DAC at a cost of $2000 plus shipping. The Pre32 with mediaboard is available now.