At this year's CES, headphones didn't seem to be as much of a focus as they have been of late. But still, I found way more new models than I could possibly write about. This article will focus on what I'll term "mass market" headphones, meaning ones that seem targeted more to the average music lover than to audiophiles. Of course, that's a subjective judgment. I'll be filing reports on audiophile headphones and headphone amps once I've had a chance to go through the high-end audio exhibits at the Venetian.

Please take any comments I make about the sound of these with a grain of salt. They're all based on quick listens, and some of these headphones are prototypes so their tuning hasn't been finished yet. 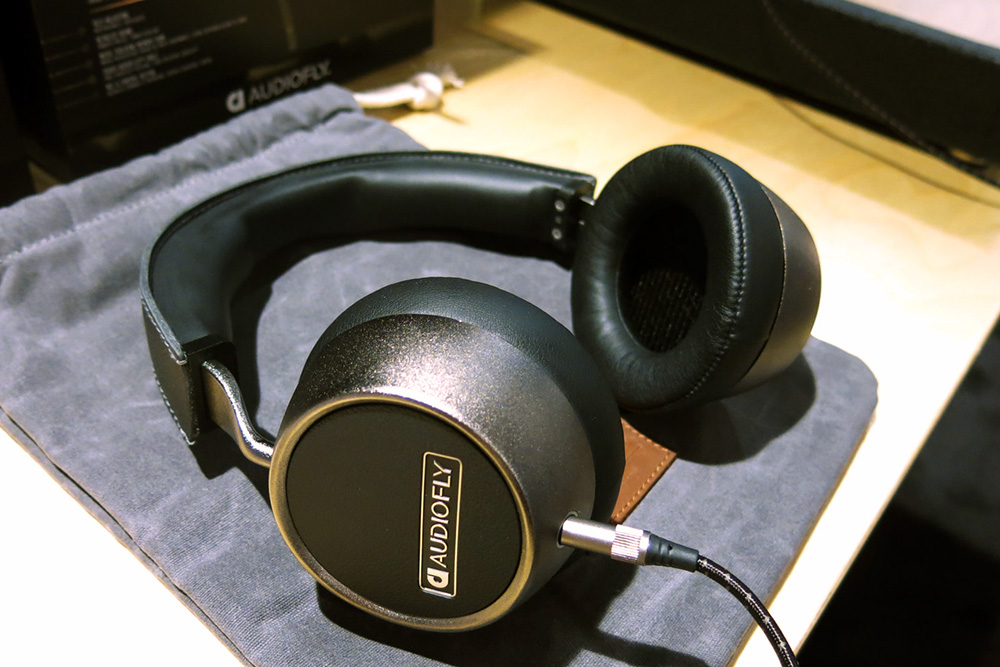 The $349 AF250 is one of the first two over-ear headphone models from Audiofly, a company that has until now specialized in earphones. It has diecast-aluminum earcups and 40mm drivers. I thought the sound was very clean, smooth, and neutral, but with about +4dB of extra bass. The $249 AF240 also uses 40mm drivers, but has lightweight polycarbonate earcups. 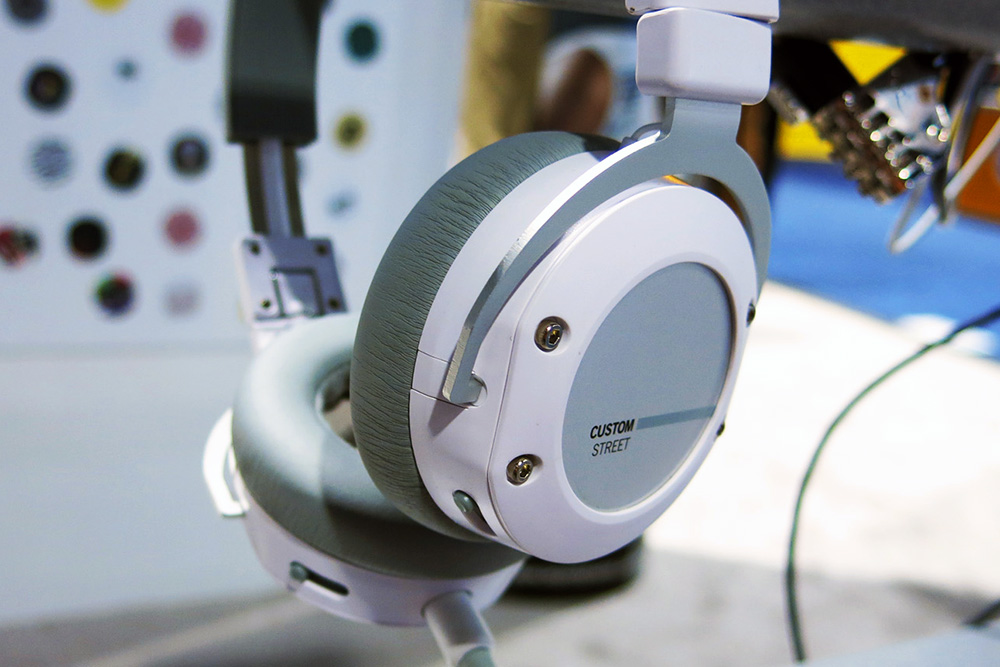 The $169 Beyerdynamic Custom Street is a smaller, on-ear version of the Custom Pro. Like the Pro, it has adjustable vents that let you tune the sound of the headphones to your liking, although the Street has only three vent positions compared with four on the Pro. It folds for easy portability. The side plates are interchangeable, and the Street includes 16 different pairs of plates. It's available in black or white. 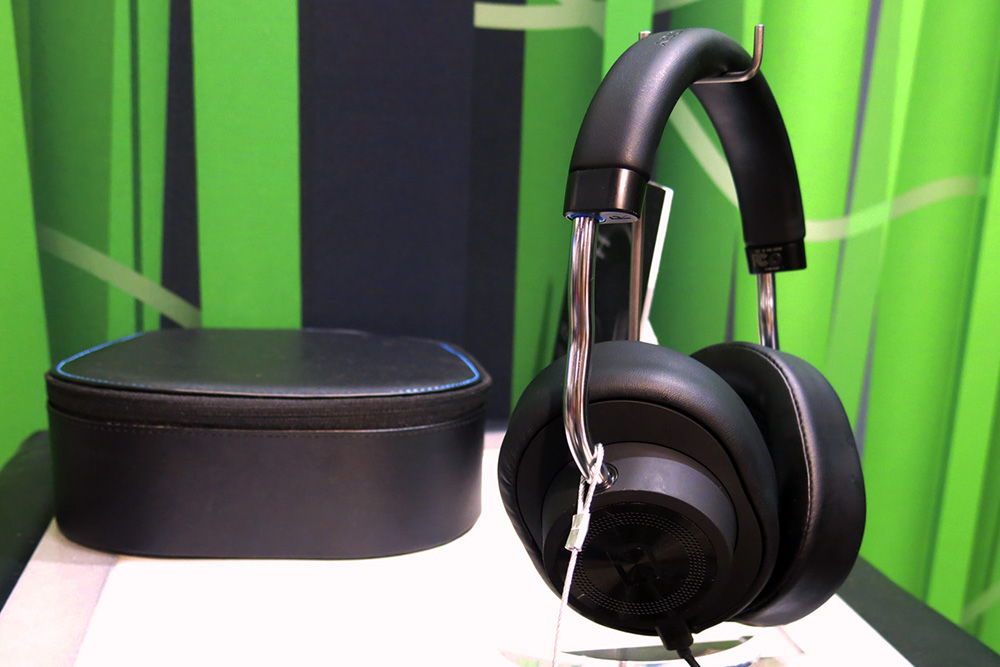 The world of noise-cancelling headphones seems split between the PSB M4U 2 (amazing sound, so-so noise cancelling) and the Bose QC25 (amazing noise cancelling, OK sound). With its first headphone model, the $399 Symphony 1, Definitive Technology is trying to deliver the advantages of both -- starting with outsized 50mm drivers and internal digital signal processing to tune the sound. It offers not only noise-cancelling but Bluetooth wireless, too. I loved the comfort of the huge earcups, and I loved the way the cups helped the NC circuitry by sealing out most external sounds on their own. 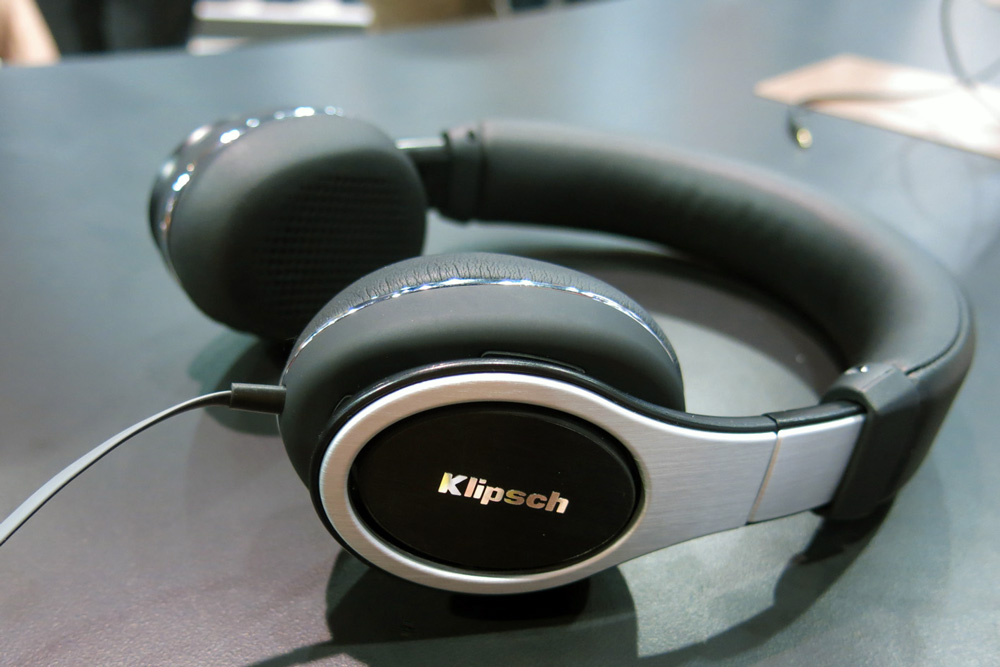 The $199 Reference on-ear headphones from Klipsch are tuned to match the sound of the company's Reference Premiere flagship speakers. (That's an idea we used to hear a lot, until so many speaker companies launched headphones that sounded nothing like their speakers.) The plush foam earpads make the Reference unusually comfortable for an on-ear, but to me, the sound seemed a lot bassier than Klipsch's speakers do. 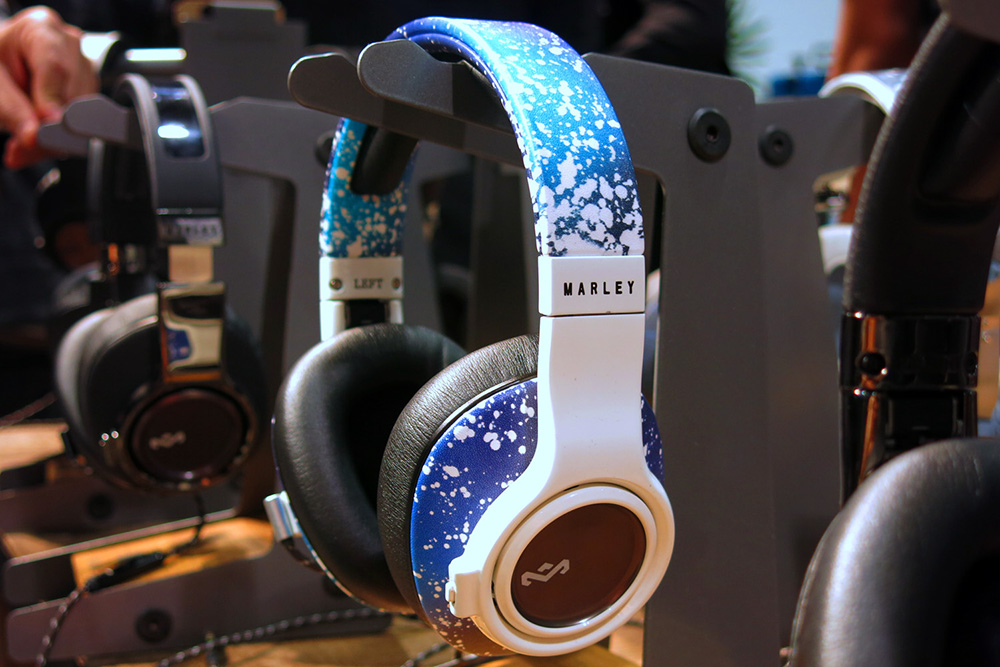 House of Marley's $299 Legend ANC Urban is (in my opinion) the company's first serious attempt at making noise-cancelling headphones. A company rep described the Legend ANC Urban as "fun and fresh," and who could argue? The water-treatment painting technique leaves every one looking a little different. Listeners who are less fun and fresh can opt for a plain black version. The body is made using plain metal and repurposed leather. I thought the headphones sounded nicely balanced. 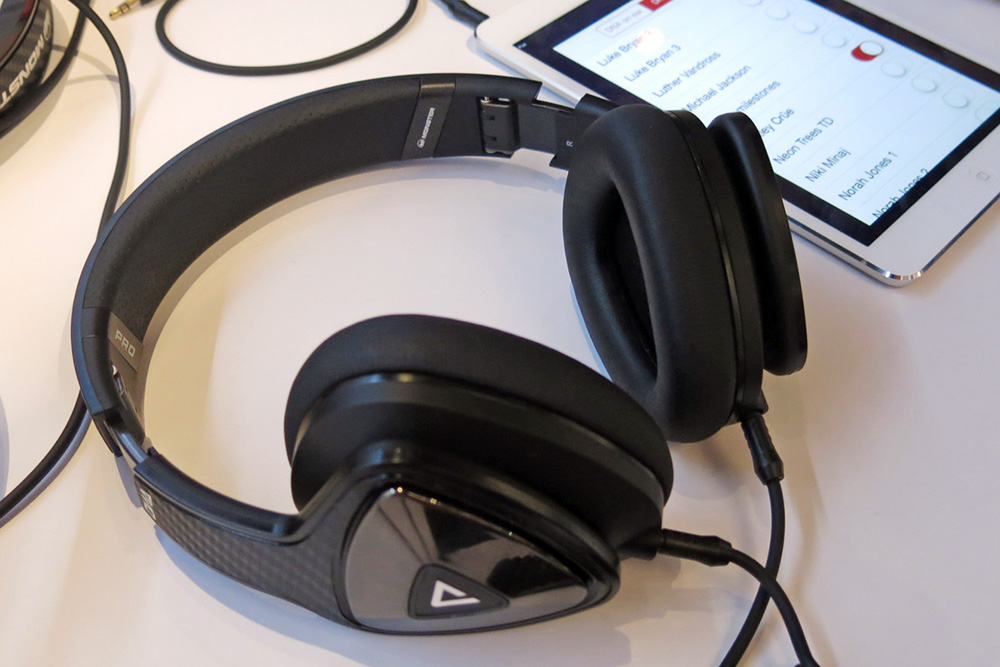 In my preview report earlier this week, I mentioned the new Monster DNA Pro 2.0 (no price available), but I didn't have a picture and didn't get to hear it. I got to hear it on the show floor, and also to use the new Monster phone/tablet app, which lets you adjust the sound and also choose among numerous special tunings created by many different musical artists. (There are three for Drake alone.) I thought the headphones sounded quite good on their own, with a very dynamic and clear sound and just a little bit of extra bass. The tunings sounded anywhere from good to horrific, depending. I was happy to hear that the Mötley Crüe tuning sounded fantastic on "Kickstart My Heart." 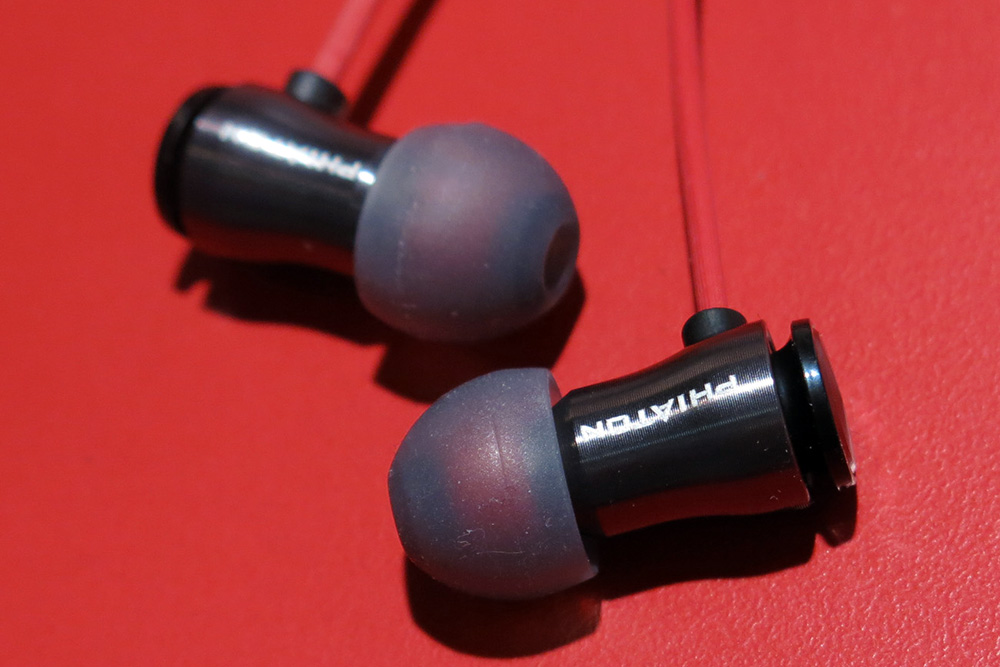 Phiaton's been something of a sleeper brand, gathering little attention despite its cool designs and generally very good sound. The MS 100 BA ($99) is the company's first earphone model using a balanced armature driver, and it includes an inline microphone for phone calls. The metal body should make it nicely non-resonant. 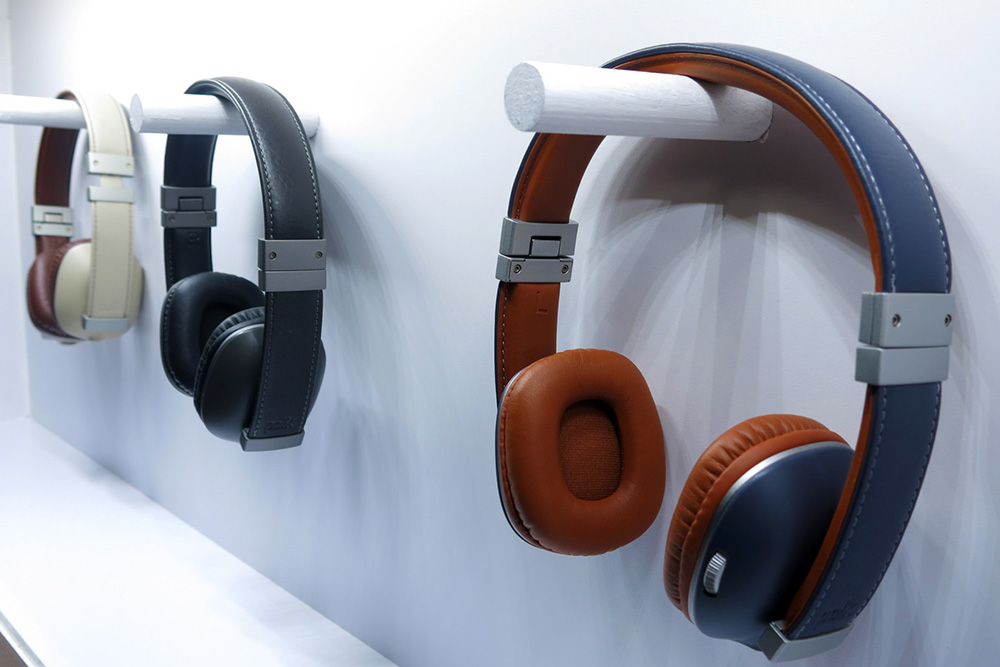 The $199 Polk Hinge Wireless adds Bluetooth to the company's beautifully designed Hinge on-ear model. It uses a cool jog dial on one of the earpieces that adjusts volume, play/pause, and forward/reverse track skip. The headband's amply padded all around, and the headphones fold for easy transport. 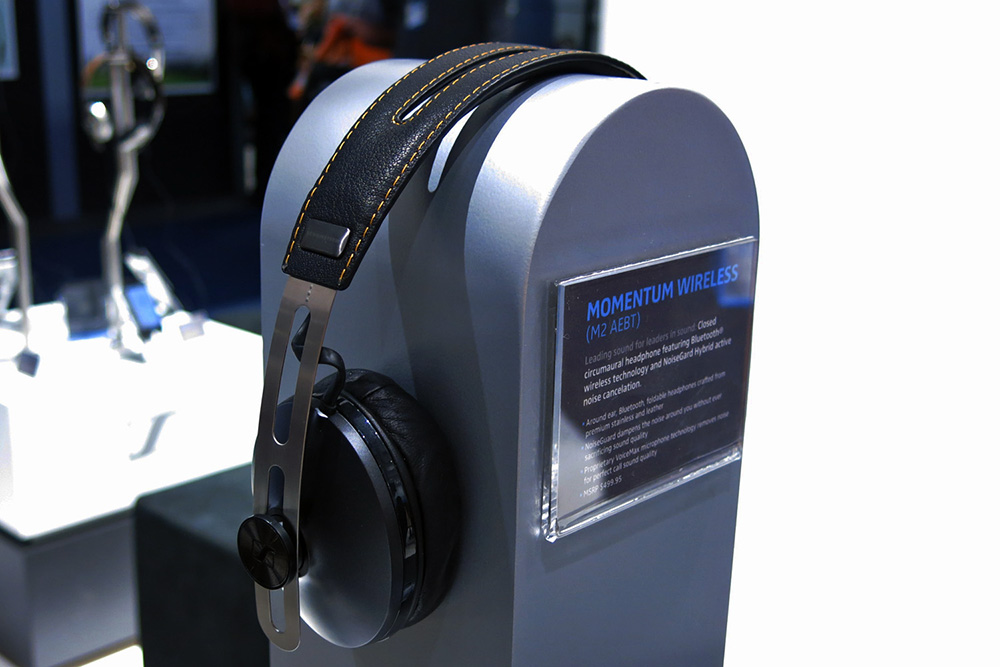 Many enthusiasts (including this one) have hailed Sennheiser's Momentum-series over-ear and on-ear headphones as among the best bargains in audiophile-grade portable headphones, so it was great to see new versions of both that incorporate Bluetooth and folding headbands for easier packing. The $499 M2 AEBT over-ear model shown here has bigger, softer earpads, addressing the comfort problems some listeners (including this one) experienced with the original model. The on-ear model is the $399 M2 OEBT. 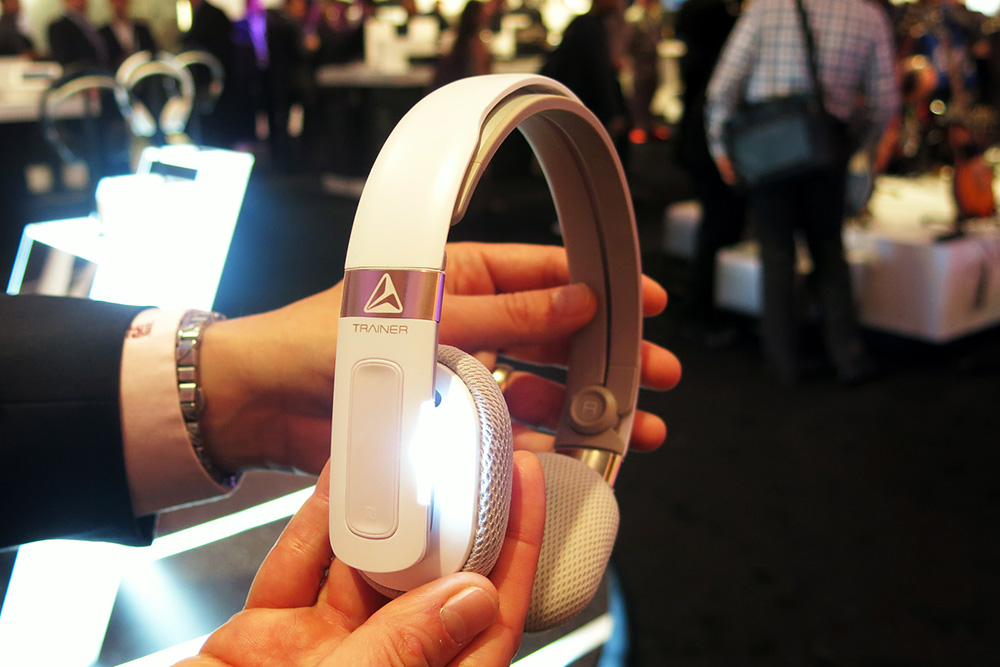 Track star Usain Bolt has switched his allegiance from Soul headphones to Gibson. When I saw the $239 Trainer, I could understand why. The Trainer has an extra band that folds out at the touch of a button to stabilize the headphones on your head during exercise; you can fold the extra band back in for day-to-day use. The sweatproof, dustproof design incorporates Bluetooth wireless, a "safe sound" mode that reduces volume and lets you hear the ambient sounds around you, and an awesome bright white flashing LED to make joggers more visible at night.