Even though CES 2015 didn't see the introduction of a whole lot of interesting mainstream headphones, there was a lot of action in high-end, audiophile-oriented headphones, with several revered brands launching new models and a few interesting new players getting into the market.

Of course, what constitutes "audiophile headphones" is somewhat subjective, but all of the headphones shown below were designed primarily for high-quality sound, with looks and convenience features lower on the priorities list.

As I stated in my article about new mass-market headphones at CES 2015, all of my comments about the sound of these headphones should be considered preliminary, because they're all based on quick impressions in a noisy environment, and many of the headphones were prototypes, not finished models. 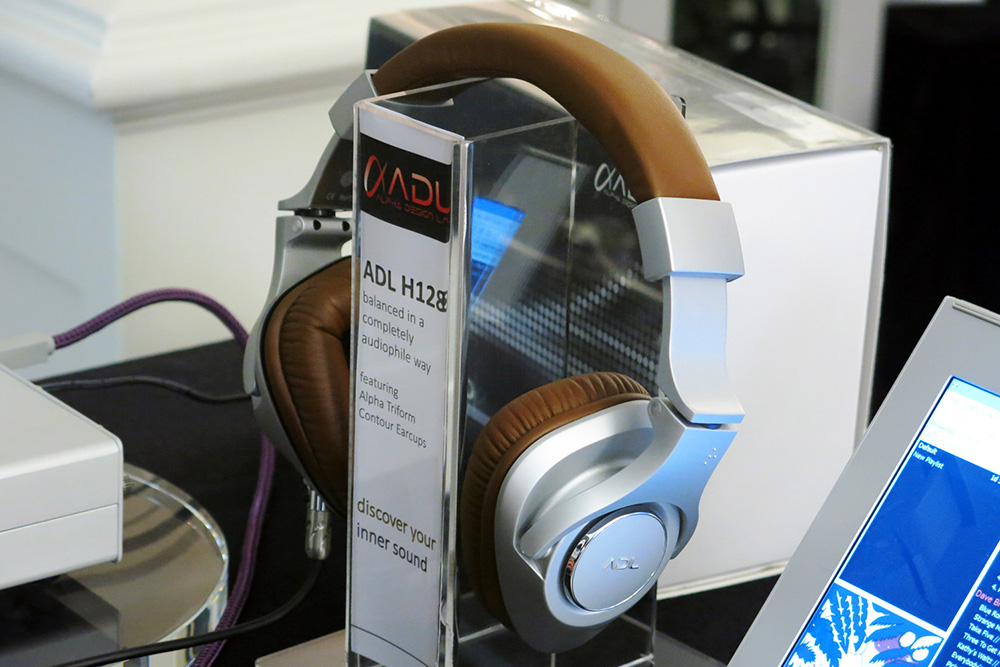 The $458 ADL H128 is a step-up model from the company's original H118 headphones. Unlike the H118, the H128 was designed entirely by ADL, with drivers designed from scratch. The headphones were voiced with the assistance of a group of Japanese audio reviewers. Like the H118, the H128 sounded to my ears to be a tad trebly, but it also sounded a lot smoother and had fuller, more dynamic bass. 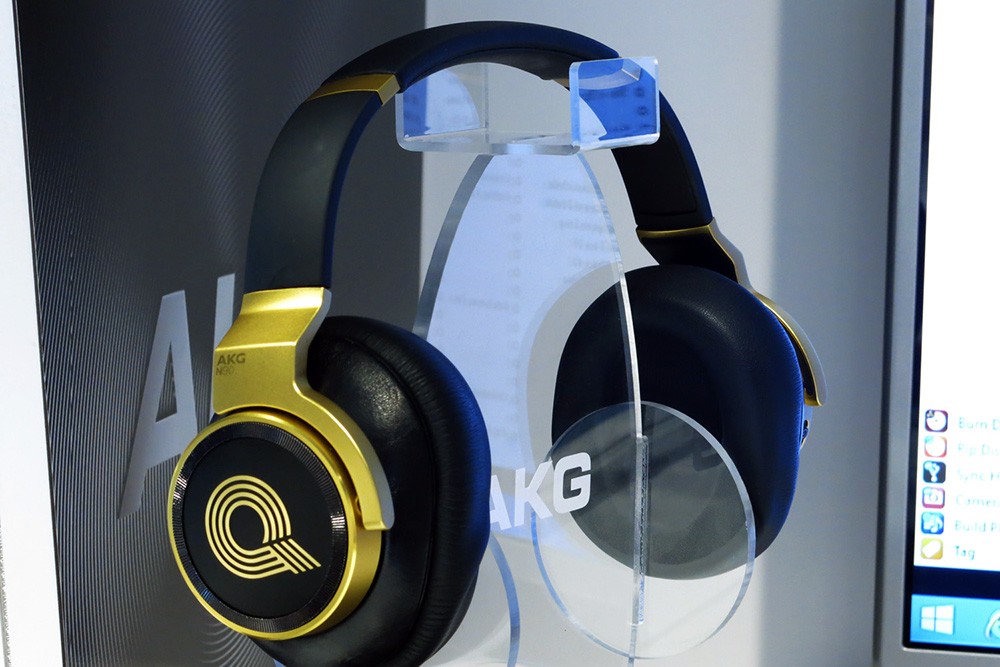 AKG's new N90Q incorporates noise-cancelling circuitry, which makes it a bit less of an audiophile model, but it's also part of the Quincy Jones Signature line, which makes it a bit more of an audiophile model. Not only was the N90Q OK'd by Quincy himself, but it also incorporates AKG's TruNote technology, which does the noise cancelling and auto-calibrates the headphones' frequency response using internal microphones while the user is wearing them, in a manner similar to the room correction technologies used in many A/V receivers. Price isn't yet set, but a Harman rep told me to expect something around $1300. 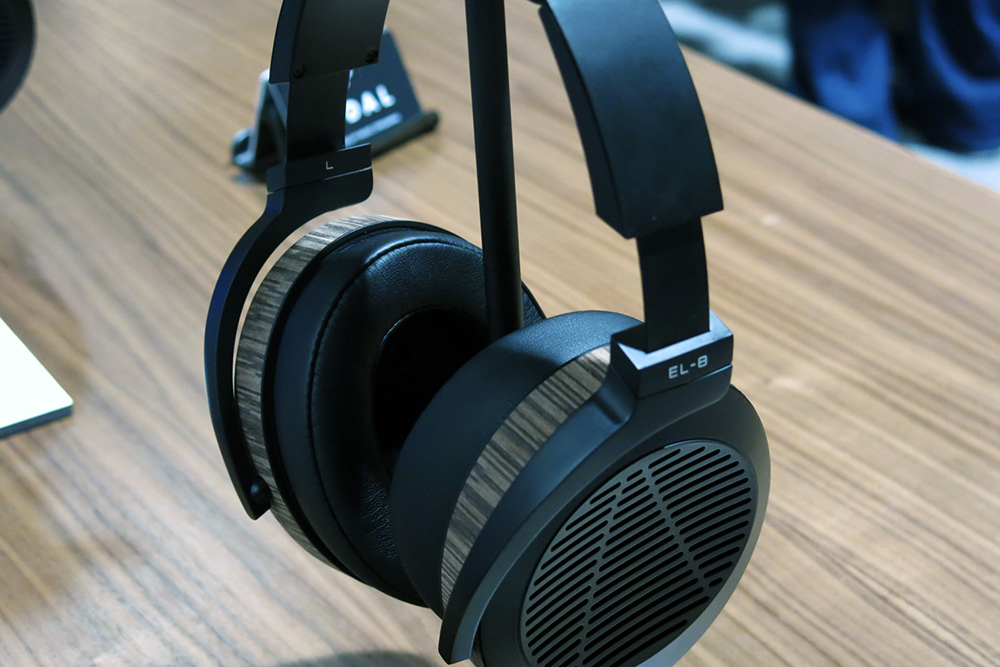 Probably the most anticipated pair of headphones at CES 2015 was the Audeze EL-8, the company's most affordable headphones yet. It's available in open-back and closed-back models, both with industrial design by BMW Group DesignworksUSA. Price for either one is $699, about 30 percent less than the company's current least-expensive model, the LCD-2. It's a much sleeker, although more plastic-oriented, design than the existing Audeze models. 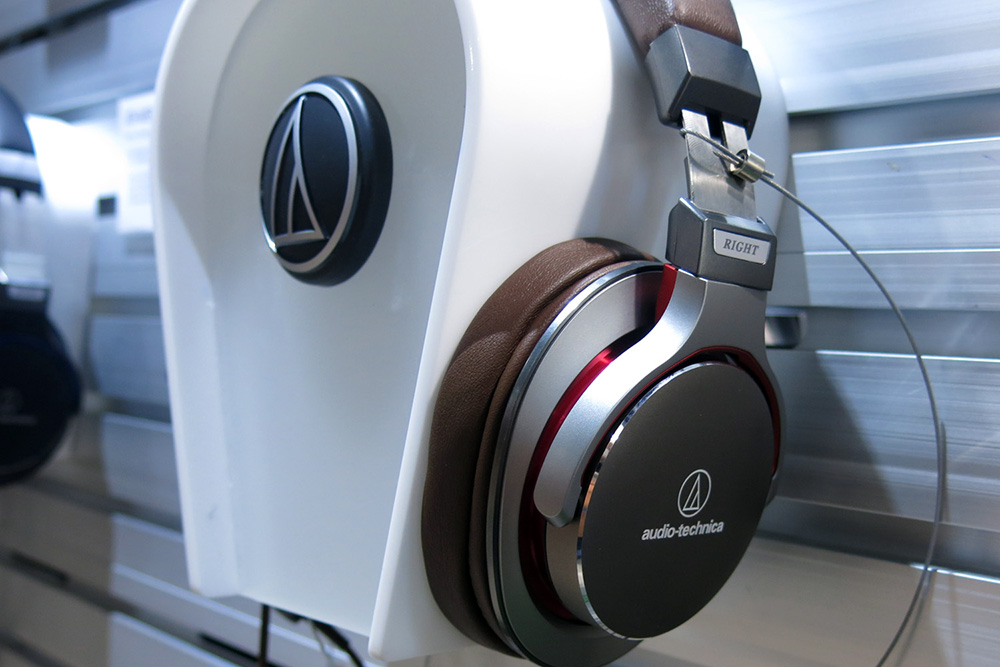 Audio-Technica embraces the high-resolution audio trend -- and indeed, the official audio industry High-Res Audio logo -- with the new Sonic Pro line of headphones, which are designed to support the extended frequency response of high-resolution audio files. The model shown here is the $249 ATH-MSR7, an over-ear model with 45mm drivers. There’s also a Sonic Pro high-end earphone model, the $389 ATH-CKR10, which uses an unusual dual dynamic driver design in a distortion-cancelling opposed arrangement. 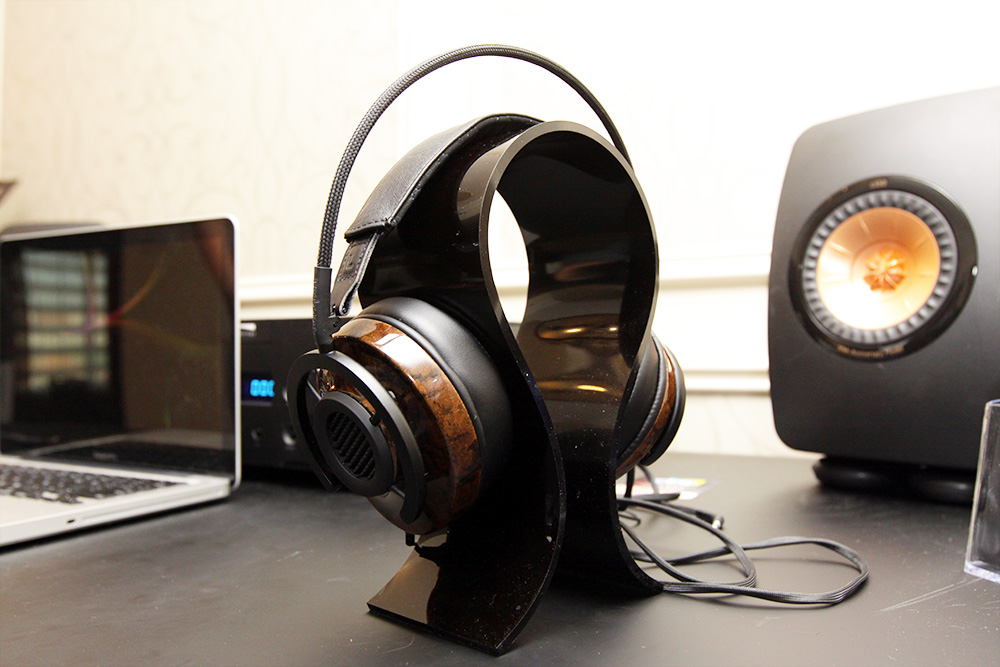 The $599 NightHawk is the first headphone model from AudioQuest, and it may go down as the best first attempt at headphones since the PSB M4U 2. It uses earcups made from Liquid Wood, a plant-fiber-based material that can be injection molded. I thought the NightHawk was easily one of the best new headphone models at CES 2015, with a seductive ease and smoothness, yet loads of detail and a nice sense of spaciousness. 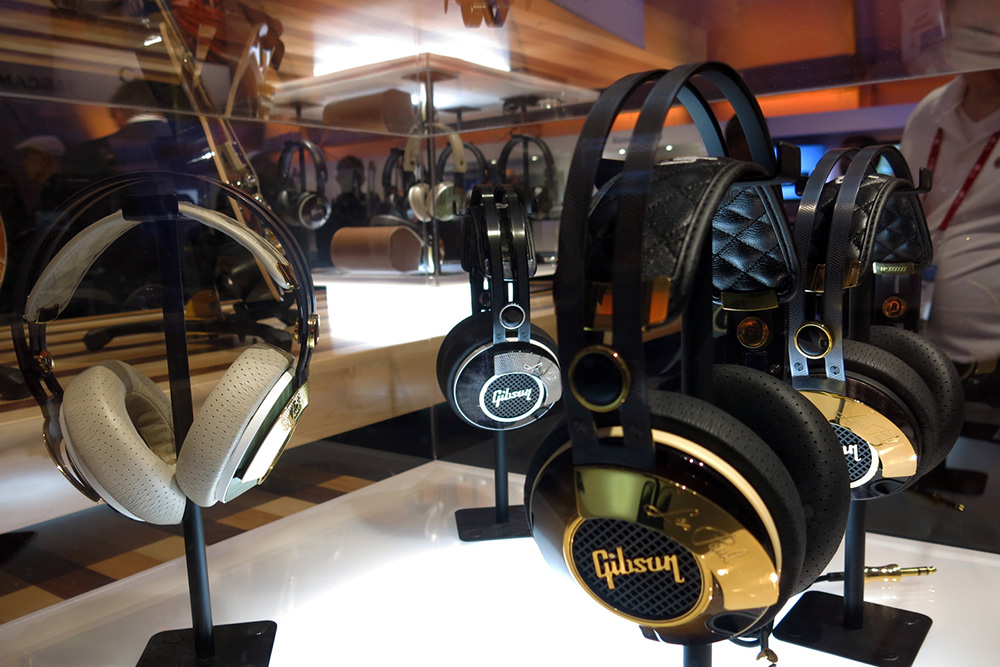 The most common question at CES is "Whaddaya seen so far?" This year, my answer was always "the Gibson headphones." Gibson showed some nice prototypes last year, but took the concept much further with a substantial line of the most gorgeous, attention-getting headphones I've ever seen. Two lines are available: the Les Paul over-ear and the SG on-ear, both named after famed Gibson guitars. And as with the guitars, there are Standard and Custom versions. They're all handcrafted in the US, from the same woods and finishes used in the company's guitars. Some even have mother-of-pearl inlays inspired by the fret markers in the guitars. They're available with standard 3.5mm cables, Bluetooth, or an Apple Lightning connector for use with iPhones and iPads. They'll be available sometime in 2015 at prices to be determined. A prototype of the SG was available for listening, and I was encouraged by the flat tonal response and vivid, detailed sound. 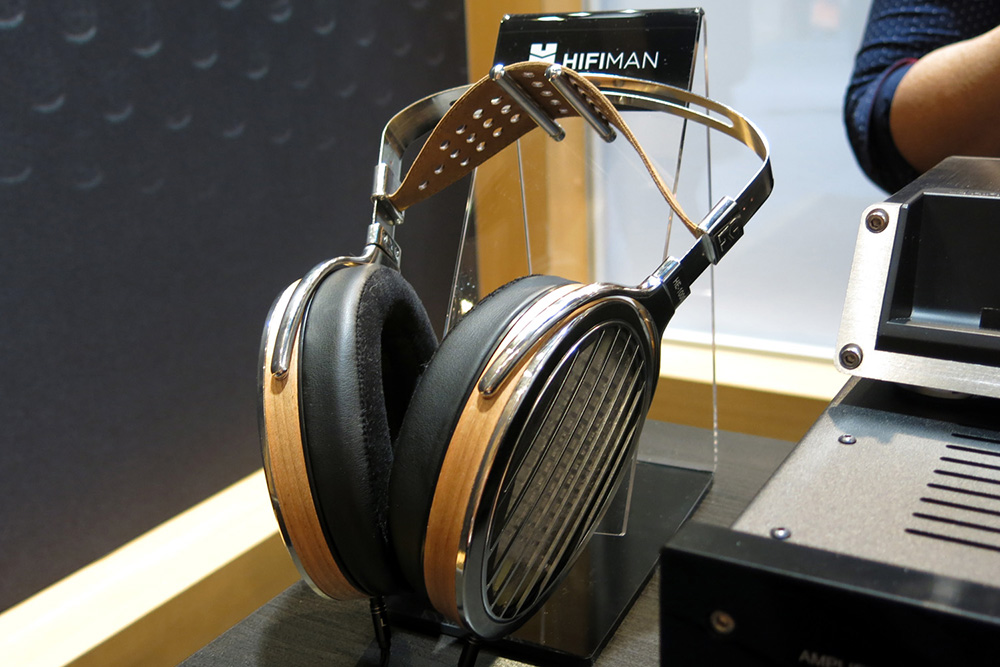 HiFiMan has played a big role in re-popularizing planar-magnetic headphones by offering awesome headphones at relatively moderate prices. The new HE-1000 is the company's most high-end headphone model yet, and a radical departure from the company's existing line. It uses a diaphragm that the company described as having a thickness (or thinness) "at the nanometer level," which gives the diaphragm lower mass that results in an incredibly spacious and realistic sound. While previous models (and most planar magnetics) use a round diaphragm, the HE-1000's diaphragm is a non-symmetrical oval design, intended to produce fewer resonances than a round or symmetrical diaphragm. 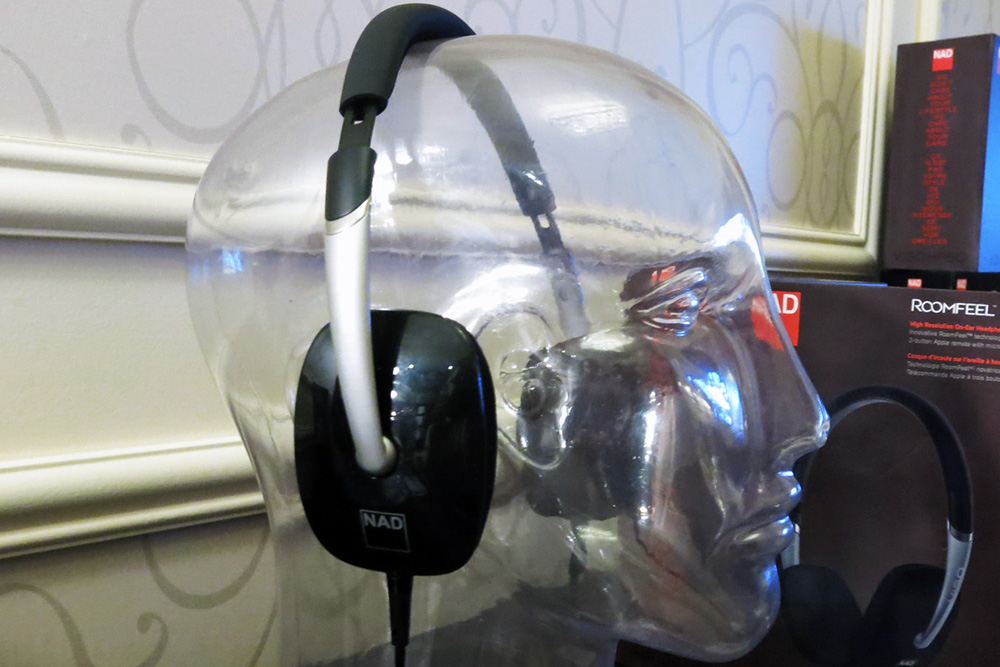 NAD's Viso HP50 is, in the opinion of a lot of reviewers and headphone enthusiasts, one of the best headphone models you can buy in the $300 range. (It's my current reference for midpriced closed-back headphones.) The new $229 Viso HP30 brings the same basic sound profile to a smaller, lighter on-ear model. However, designer Paul Barton told me that the HP30 is an all-new design that comes from a different factory than the HP50. 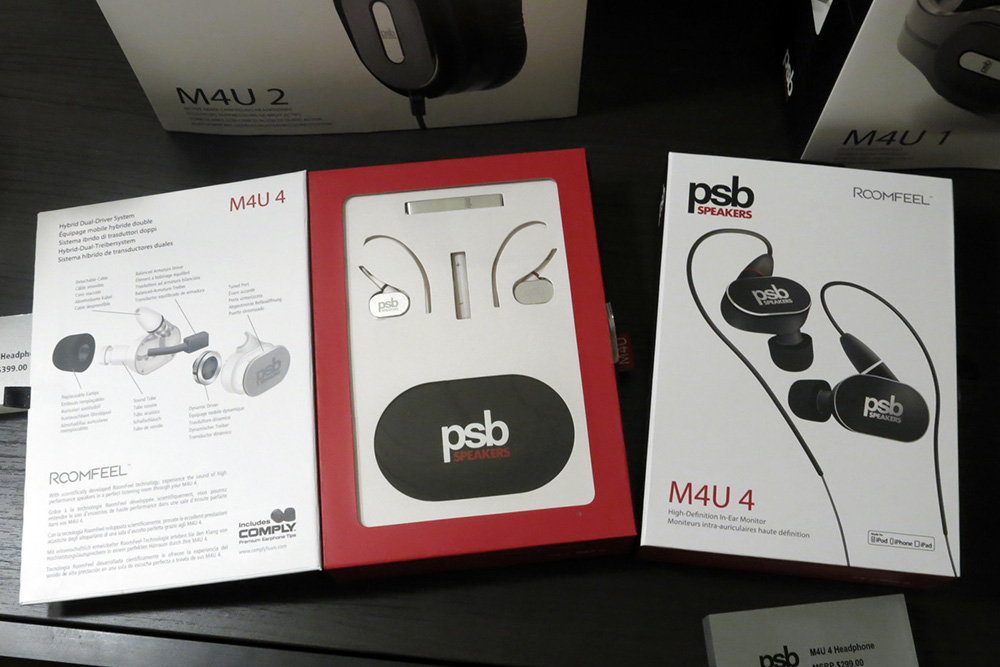 In just a few years, PSB has earned one of the strongest reputations for quality in the headphone business, thanks to the deep knowledge and extensive research of company founder Paul Barton (who also designs NAD headphones). The $299 M4U 4 is the first earphone to wear the PSB brand. It incorporates one dynamic driver (essentially a miniaturized conventional speaker) to handle the bass, and a balanced armature driver to handle the mids and highs.