To further explain his position, Bent invited us to sit down with him at High End so he could draw diagrams to illustrate how data travels inside a computer to outside it and into the DAC. He concedes that a properly implemented asynchronous USB connection can be a great, low-jitter transfer mechanism. With asynchronous USB transfer, it's the DAC's clock that controls the flow of data from the computer to it.

Bent feels, however, that as good or better jitter performance is possible by not worrying so much about the transfer of data from the computer to the DAC, and worrying more about dealing with jitter inside the DAC, which is Hegel's approach. Hegel puts into their DACs large buffers that store data when it arrives from the computer. Then, by using extremely precise, well-isolated clocks, they move that data from the buffer and through the DAC in perfect time until it's turned into an analog signal. He says that the measured jitter performance using this technique is as good or better than asynchronous USB.

Bent feels that additional improvements are possible by improving the DAC's connectors, which is where his talk about "super exciting" coaxial connectors comes in. If you doubt that coaxial connectors can be super exciting, which we did, just watch Bent's face as he talks about them and how fast his hand moves that pen across the paper when he explains it. I thought something was going to catch fire! 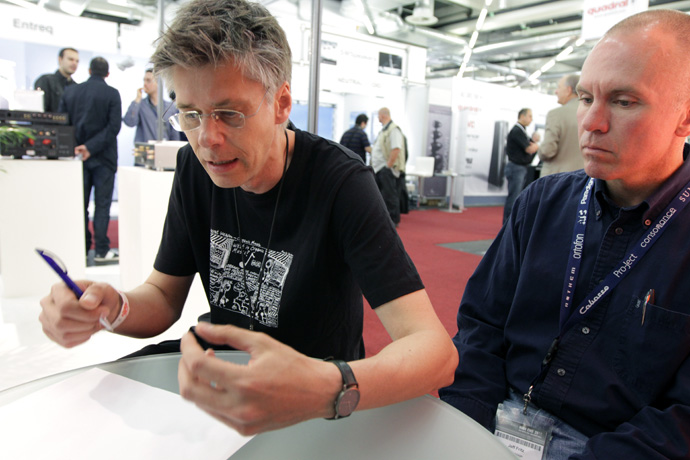 Bent cautions that typical RCA connectors are not 75 ohms, which is what they're supposed to be for S/PDIF connections. He says that BNC connectors come in proper 75-ohm types, but also 50-ohm types. His claim is that many manufacturers are using 50-ohm BNC connectors, which isn't a good thing either. In a nutshell, non-75-ohm connections and mismatched impedances cause reflections in the digital signal that, in turn, increases jitter.

Hegel prefers to use the more common RCA connectors on their DACs, and since those aren't 75 ohms, they add a circuit to the connector to ensure that it presents a perfect 75-ohm impedance. This circuit is implemented on the company's HD20 DAC. Bent says that the improvements are not only easily measurable but also quite audible.

With AudioQuest's talk about the importance of USB and FireWire cables and Hegel's thoughts on asynchronous USB and coaxial connectors, it's obvious that digital music playback isn't as straightforward as many people think.