While strolling through one extremely high-end exhibit after another, you can easily lose touch with reality. $125,000-per-pair speakers? I'll take them. $30,000 amp? Four please -- I'll biamp.

So when one of the best sounds at the show comes in at around $8600 for the entire system . . . well, it makes me sit up and take notice.

Show coverage goes like a blur. There's rarely time to sit down and listen for long, as we have to move from room to room looking for the new and newsworthy products. Occasionally, though, I sit down to rest my feet and have a chat with one of the manufacturer representatives.

I took a seat in one of Dynaudio's three rooms without thinking about what type of product I was facing. "That's a good choice," said Michael Manousselis of Dynaudio. "I see you're interested in our new DM3/7 speaker. It's an outstanding bargain at $2000 a pair."

"Of course -- I've heard a lot about it," I deadpanned and settled in for a listen. 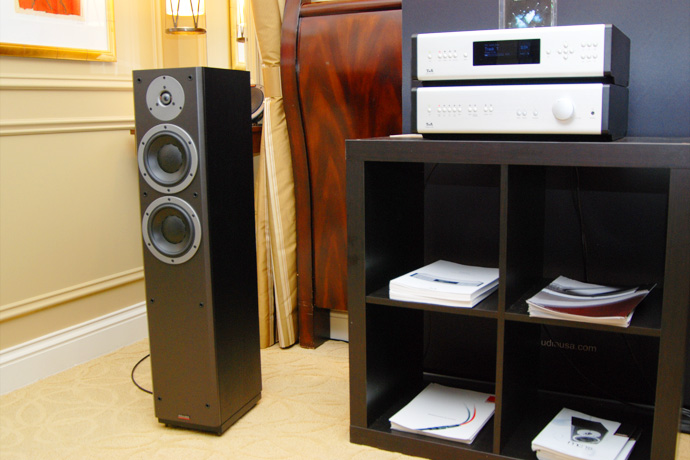 The DM3/7 is a really intriguing product. Although it's a fairly conventional-looking floorstanding box, the speaker contains real high-performance, made-in-Denmark drivers. The two woofers feature Dynaudio's oversize voice coil, as well as cast baskets that are generally found only in the company's more expensive speakers.

"This is a trickle-down product for us. We're a large company, and our economy of scale allows us to produce speakers like the DM3/7 that punch well above their weight class," said Mike.

The DM3/7 had an exceptionally weighty bottom end, but it wasn't overdone in the least. I've been using Shantel's remix of an Amsterdam Klezmer Band song to inject some life into the somewhat staid CES proceedings, and this track proved a perfect choice here. There was plenty of bounce in the music and the highs were silky and under control.

Dynaudio was teamed up with T+A, and the DM3/7s were running off the T+A Music Player ($3800) and Power Plant ($2800) CD player and amp combo. Although the T+A gear isn't exactly cheap, it's quite reasonable considering much of the stuff that was showing at CES.

And the results spoke for themselves. The Dynaudio DM3/7s are an island of sanity in an ocean of excess. Well done, Dynaudio.