On February 1 my review of the Vivid Audio Giya G2 loudspeaker, which sells for $50,000 per pair, will be published on SoundStage! Hi-Fi. I don't want to give away too much from the review, but I will tell you two things: the G2 is the best loudspeaker I've ever heard, and it may well be the best loudspeaker in the world at this time. It's a radical-looking speaker that produces ridiculously good sound -- sound that's clearer, cleaner, and more effortless than most audiophiles have ever heard. 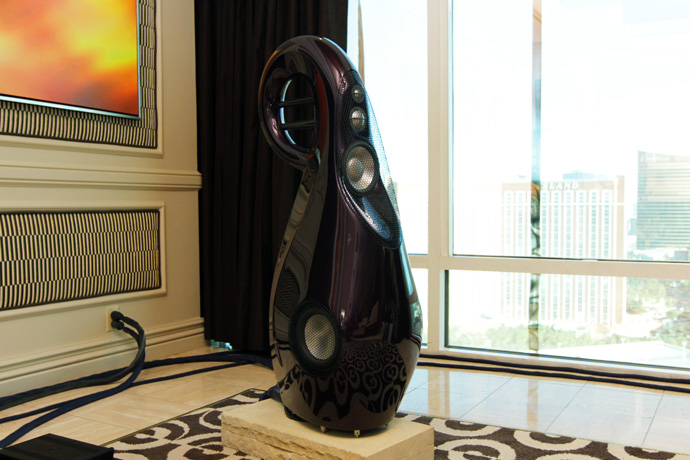 On January 10 Vivid Audio showed for the first time in North America the Giya G3, an even smaller, less expensive Giya that -- at least from my initial impressions in Vegas -- seems nearly as good as the G2. Whereas the G2 looks pretty much the same as the G1 ($65,000 per pair) that inspired it -- it's only a little smaller and lighter -- the G3 looks a little different from those two. Aside from the slight disparity in size and weight, its driver baffle is recessed more and the tapered tubes that dissipate the rearward flow of energy from the tweeter and midrange cut through the curly-top horn tube, whereas with the G2 and G1 they're concealed entirely in the cabinet. The G3's price is $40,000 per pair. It's not drastically cheaper, but the price difference is significant enough for those who watch their wallets.

The G3 may differ from the G1 and G2, but the Giya family resemblance is certainly there, not just in terms of looks but also sound. Chief designer Laurence Dickie, company president Philip Guttentag, and North American distributor Philip O'Hanlon treated our team to an amazing demonstration of the G3 across the street from the CES venue at the Mirage Hotel and Casino. Without question, this was one of the best sounds in Vegas this year. 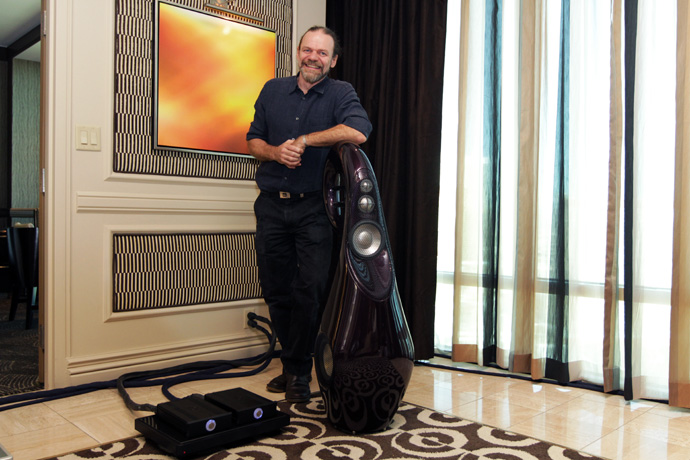 Designer Laurence Dickie with the G3

The sound of the G3 at the Mirage was strikingly similar to that of the G2 in my room -- a detail-rich, incredibly lively, and thoroughly transparent sonic picture that immersed the front end of the room with a soundstage that was ultra-wide and very deep. The G3s at the mirage matched the extraordinary resolution and exceptional neutrality and refinement of the G2s in my listening room. Visually, the G3s are so eye-catching that you just can't overlook them, but like the G2s again, when they're playing music they sonically disappear, making the sound seem like it's simply popping out of thin air.

The G3 also did something else that I've heard only the G2 do as well -- it went from whisper quiet to wall-breaking loud in an instant without losing composure. Vivid's Giya G2 and now the G3 are the most effortless- and transparent-sounding speakers I've ever heard, and I recommend that if you get a chance to hear either (or G1s for that matter), don't be afraid to crank 'em up. In fact, O'Hanlon encourages it, and he takes part in this bad behavior quite often himself. He played tracks from Adele and Rihanna at ridiculously loud levels during our visit just to prove what a pair of G3s can do. The G3's bulbous shape and colorful finishes might have some people thinking it's a delicate flower, but it's just the opposite -- while the G3 can deliver any kind of music with unparalleled delicacy and finesse, it can also rock, sock, and punch with seemingly unlimited power and force, resulting in a speaker that can reproduce any kind of music with unrivalled fidelity.

Where the G3 differs most from the larger Giyas is in the bass. Quite simply, the G2 with its bigger woofers and larger cabinet can reach down to 20Hz in my room, so it's truly a full-range design. My best guesstimate is that the G3 reaches to 30 or 35Hz, so the G3 is better suited for smaller rooms, which is exactly why it was designed.

So if you read my review of the Giya G2 on February 1 and feel as though you're missing out on something either because you can't accommodate a speaker of the G2's size in your room or you can't afford it, head straight for the Vivid Giya G3, a speaker that's every bit as glorious sounding as the bigger Giyas that inspired it.