With the introduction of the Amati Futura, Guarneri Evolution, and The Sonus Faber loudspeakers over the last year or so -- and most recently the Aida, which is making its North American trade-show debut at CES -- Italy's Sonus Faber has clearly become a more engineering-driven company than in years past.

I spoke with Paolo Tezzon, Sonus Faber's chief designer, and asked him about this technological awakening of the brand. "Well, that's for sure," he said. "The Sonus Faber's introduction represented the chance for us to experiment and offer to the market many solutions that our R&D team and I were thinking about for some years before. The team is composed of Livio Cucuzza, who's basically the designer of Sonus Faber's latest products' look, as well as the connected solutions and some of the materials that are used in the products, always strictly following some preliminary electro-acoustical parameters. Then we have Marco Trentin and Gianluigi Piccin: they both take care of engineering and technical drawings, which means the use of a large amount of creativity. It is thanks to them, for example, that the idea of the trolley to move The Sonus Faber and Aida came about. We also have two external consultants working very closely with us: Umberto Nicolao, a well-known international audio consultant and teacher, and father of the Sound Field Shaper patented technology; and Joseph Szall, one of the world's major experts in audio transducers. Those two great guys are the 'godfathers' of our young R&D team." 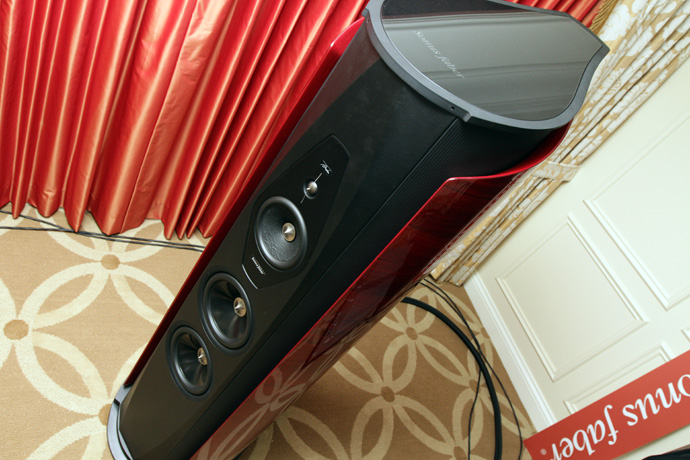 The new Aida loudspeaker ($120,000 USD per pair) is a visual feast. The photos I'd seen before CES did not do it justice, either in terms of aesthetic perfection or sheer size. This is one big loudspeaker. It does not, however, dominate the room the way some Superspeakers do. Its proportions are supermodel-right, and the varying layers of materials and panels combine with the contoured cabinet to give it visual appeal from any angle. But there's also ample substance underneath the pretty exterior. 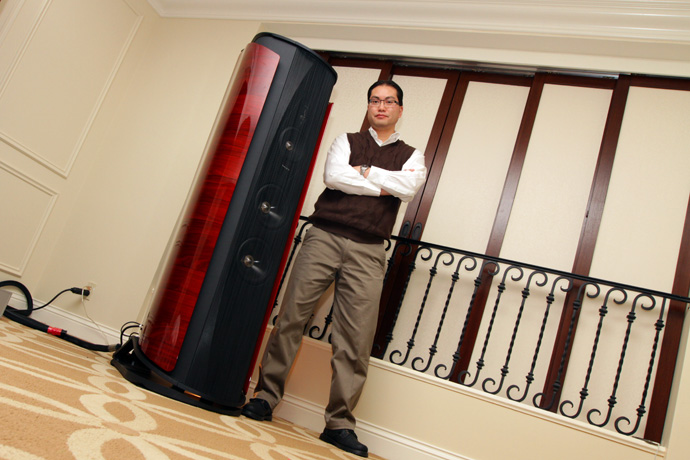 The SoundStage! Network's Roger Kanno proves that the Aida is much larger than most pictures of the speaker alone make it appear.

One design characteristic of the Aida that is unique is the Tuned Mass Damper, which is used to eliminate cabinet resonance. I asked Tezzon about its application in Aida: "There are many advantages in properly decoupling speakers from the floor if compared with traditional speaker-spike coupling (no more vibration and spurious noise transmission to the listening environment), but there's also a theoretical problem: no matter how well constructed the cabinet is, energy needs to be dissipated in a different way than through the floor spikes companies traditionally use, so a micro vibration-to-heat transformation done by the Tuned Mass Damper is the solution. The device works basically the same way in The Sonus Faber and in Aida, but in the latter implementation it is a distributed multiple mass damper, and is therefore effective on a very wide spectrum meeting the specific project's needs." 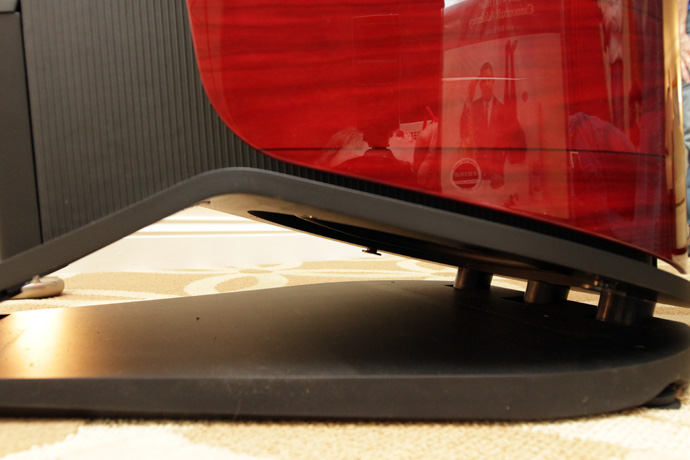 The recent Aida press release focuses heavily on the driver designs and their implementation in the Aida. When I spoke to Tezzon about the specific technical and sonic goals for these new Sonus-designed drive units, he was adamant about their importance: "The answer is very simple: nothing available on the market could fulfill our desideratas [Latin for desired things]. For example, with the research in the vibrational performance of the cabinet, we have seen the way to extend the positive features of our ideas to the basket of the midrange, the most important 'vocal' unit. Our bias towards cellulose fiber as a cone material (a bias also shared by musicians) led us to further expand on known historic 'values' of The Sonus Faber's sound. Our own blend of air-dried non-pressed midrange cone has a unique mix of natural fibers. We definitely do not despise high-tech solutions since we used them in the sandwich structure of Aida's woofers, with the twist of the cellulose fiber skins for a seamless integration with the midrange. For the sake of our goal to get a homogenous sound we use for the tweeters, as always, a viscoloid-treated silk diaphragm with the DAD device, which is a synthesis of the advantages of domes and ring radiators, which is to our ears far superior to hard domes. Speed and dynamics are a consequence of high-power magnetic systems often using neodymium. We do not want to impress with sparkling effects, the aim being the opposite: a very detailed, synergistic sound without listening fatigue." 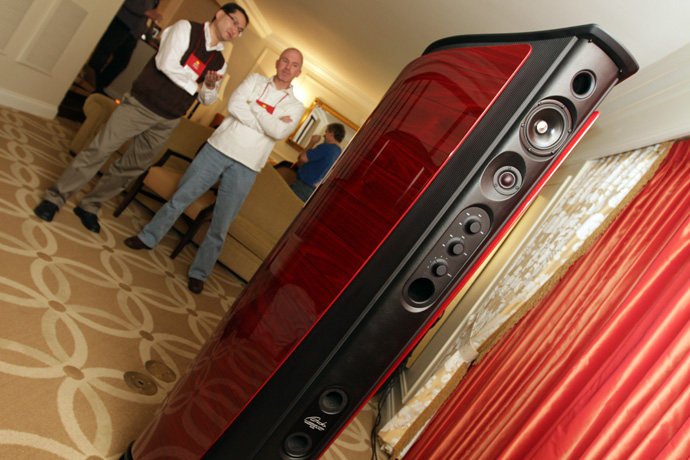 Lastly, I discussed with Tezzon the Sound Field Shaper -- the driver array that fires to the rear of the speaker -- which seemingly addresses the off-axis sound radiated into the room. "Basically, conventional loudspeaker systems' main defect in the sound image reconstruction is soundstage depth," he said. "This is due to the directivity of magneto-dynamical transducers. In other words, they show a low propensity to generate a three-dimensional sound image. Musical instruments can be reproduced by a good-quality speaker with all their tonal characteristics, and their position can also be placed with sufficient plausibility and accuracy, but together they tend to lie flattened on the same plane, showing reduced soundstage depth. The Sound Field Shaper is a patented system of rear-emission speakers, whose job, in concert with the level regulator, is to provide the listener with a tool to overcome this gap, allowing him, in fact, to 'shape' the soundfield's depth generated in the listening environment and finally giving him much more realistic and enjoyable music reproduction."

I ended my conversation with Tezzon by asking him what he thought was the single most important technical advancement accomplished by Sonus Faber in the Aida. The answer should surprise no one: "The synergetic sum of all of them! Intended as a means to an end: music." Who can argue with that?