Over the years, the Venetian hotel has become the hot spot for higher-end products at CES, and anyone who has visited the Venetian knows it's important to keep a keen perspective of things because many of the two-channel music systems on display there can cost more than your house. 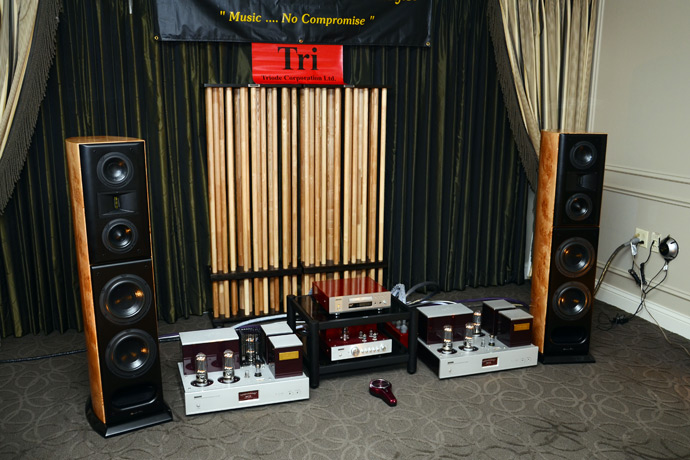 With my perspective in check, I began making my way up and down the halls of the Venetian looking for new products when I was unexpectedly stopped in my tracks by a fantastic-sounding system. Once I sat down for a serious listen, I learned it was a joint effort between two companies: Triode Corporation and Acoustic Zen. The system itself consisted of all Triode electronics: a TRX-1 tubed preamp ($3200), TRV-CD5SE tubed CD player ($2500), and a pair of TRX-M845SE monoblocks ($20,000/pr.). The speakers were Acoustic Zen Crescendos priced at $16,000 per pair. Everything was connected via Acoustic Zen Absolute Copper interconnects ($1498 for a 3' length) with the exception of the CD player, which sent its signals to the preamp via Acoustic Zen's new Absolute 75 digital cable ($480 for a 3' length). Power was supplied via their Gargantuan-series power cords ($1040 for a 6' length) plugged straight into the wall.

The sound was simply spellbinding. I can't recall hearing imaging this good on any system using conventional speakers for less than $100,000, and if you do the math, you'll note that this system doesn't even reach $50,000. Not only did it image well in front of me, but it placed instruments three to four feet in front, behind, and beside the speakers! Bass control was tremendous, and the balance of warmth and detail throughout the midrange and top end was some of the best I've heard in a system where every component utilizes tubes. What's more, two of the products used in this system, the preamp and the amplifiers, just went into production less than a week ago, as they're the first of their kind for Triode. According to the reps, they've never made a preamp or monoblocks before. 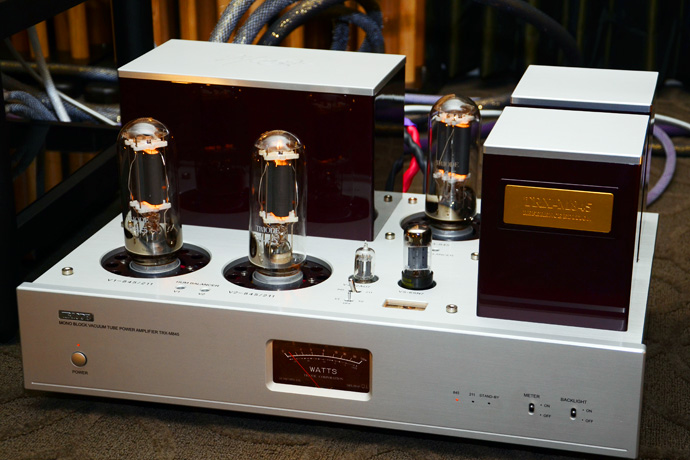 The amplifier is not only visually impressive; it's actually quite distinctive in its design. The TRX-M845SE takes advantage of a selectable-bias input stage using two different tubes (12AU7 or 6SN7), and it has an unusual output stage configuration consisting of one Triode 845 tube driving two other Triode 845s in parallel. The result is 50W of clean class-A power into an 8-ohm load. How big of an impact both the new monoblocks and preamp had on the sound I cannot say, but I can say that I could have listened to it all morning.

The relatively low price and tremendous performance of this system presents an enormous value in a world where a pair of monoblocks alone can cost well over $100,000. For this reason, I have to say that this was the most impressive system I heard at CES 2012.