The North American press can rightfully be accused of missing the boat when it comes to Vivid Audio, a company that does its design work in Britain and its manufacturing in South Africa. That includes us. Vivid released their B1 loudspeaker in 2004, yet we only reviewed it in 2010, and some other magazines are just getting around to writing about it. The B1 is still current in their line-up, and they have no plans to change it.

Why did everyone pass Vivid by? I have no idea what everyone else's excuse is, but I confessed in my B1 review that when I first looked at their products way back when, I thought there wasn't much to them. I was wrong.

The reason that it's so easy to overlook what Vivid does is that their speakers are deceptively simple looking. Their unique styling also makes them look more like a lifestyle product than a serious assault on the state of the art. Wrong again. The B1 is a class-leading loudspeaker, even seven years after its initial release. I attribute that longevity to great design work and the use of advanced technology that was far ahead of its time seven years ago and can still be considered sophisticated today. Most of the credit goes to Laurence Dickie, Vivid Audio's chief designer. Laurence used to be with B&W back in the day and was responsible for things like the Matrix enclosure and the Nautilus loudspeaker.

Despite being pretty much ignored in North America for so long, Vivid Audio has a vast product line today that tops out with the ultra-radical-looking Giya G1, which is priced at $65,000 USD per pair. In Montreal, though, they showed their entry-level floorstanding loudspeaker, the V1.5, which is priced at $7700 per pair and first came to market several years ago. Yes, it's kind of old, too -- not as old as the B1, mind you, but old enough. Philip O'Hanlon of On a Higher Note, Vivid's North American distributor, confesses that the B1 is better than the V1.5, but quickly adds, "And it damn well better be at double the price!" Agreed. 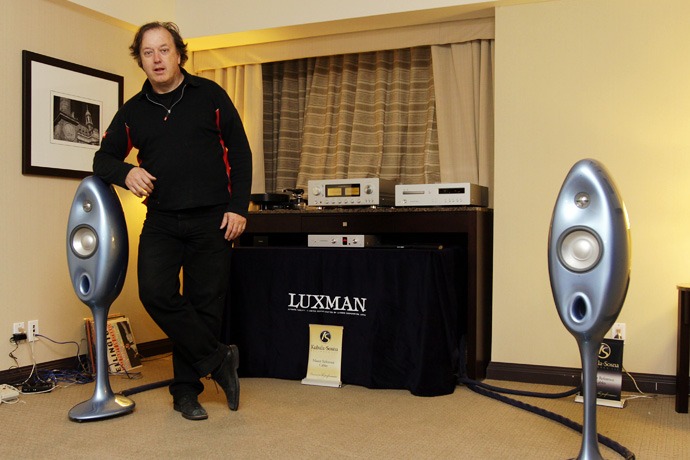 I haven't had enough experience with the V1.5 to know if it's a killer in its price range the way the B1 is, but I can say that in Montreal the pair sounded shockingly good being driven by a Luxman L550A-II 20Wpc pure-class-A integrated amplifier ($4800) with a Luxman D05 CD/SACD player ($5000) up front spinning Philip's discs. Kubala-Sosna supplied all the cables. The sound was remarkably clean and open, as well as viciously well detailed, which is exactly what I heard in my room when I reviewed the B1s. The V1.5 uses the same tweeter and mid-woofer that the B1 does, along with the same kind of super-inert cabinet construction. The thing is solid. But the V1.5 is a two-way instead of a three-way, and it uses a waveguide to shape the output of the tweeter to blend well with the mid-woofer. The B1, with its dome midrange, doesn't need a 'guide.

Admittedly, Vivid's speakers are rather odd looking, but their sound is spectacular. This is a company that has been employing tomorrow's loudspeaker technology for years, making it readily available today. Anyone shopping for a pair of speakers in this price class should hear the V1.5s before laying down big money on something else. Whatever you do, don't pass them by the way I once did.