Marvelous Mozart and the Rise of the 2.5-Way

I'm noticing a definite increase in the number of high-quality two-and-a-half-way speaker designs. At this show I was bowled over by Jeff Joseph's new Perspective, a two-and-a-half-way floorstander that costs $11,800 per pair, and I also quite liked Vienna Acoustics' Mozart Grand Symphony Edition (SE), which is just under one-third of the price: $3500 per pair.

There are many ways to design loudspeakers, and it's foolish to think that a three-way will automatically be better than a two-way, or that a four-way is better than a two- or three-way. It depends mostly on the execution of a particular design. Still, there are some "sound" technical reasons why a two-and-a-half-way design is a good way to go.

As the name implies, two-and-a-half-ways are somewhere between a two- and three-way design. In a two-way design there's a tweeter and a mid-woofer. The tweeter handles the highs and the mid-woofer handles what's below. In a three-way there's a tweeter, midrange, and woofer. The tweeter delivers highs, the midrange handles the midband, and the woofer is dedicated to the lows. In general, three-way designs deliver more bass than two-ways because of the dedicated woofer, which can be made to go much lower in frequency since it doesn't have to blend with the tweeter. But a three-way requires a much more complicated crossover design, and some feel that the increase in parts and complexity takes away from some of the purity that two-ways can achieve. Whether that's true, though, depends mostly on the competence of each design. 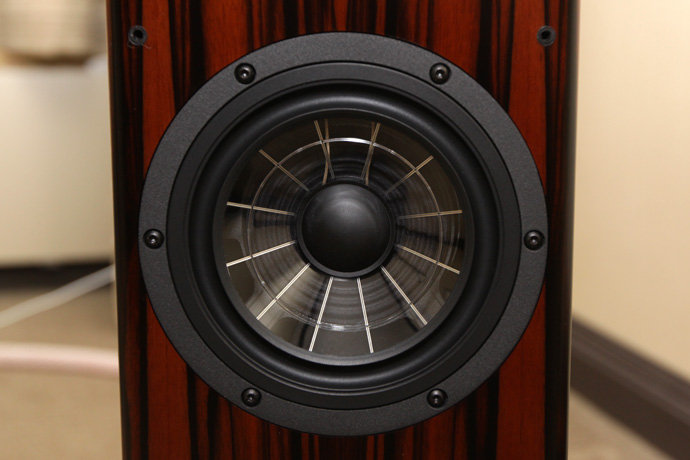 A two-and-a-half way speaker has a tweeter as well as a woofer and a mid-woofer, and they're usually both the same size, which is how it is in the Mozart Grand SE, even though they're not the exact same drivers. The Mozart Grand SE has two 6-inchers, although it's the woofer, which is dedicated to the lows, that has the company's Spider-Cone construction, which increases stiffness. How a two-and-a-half-way is configured goes like this: the tweeter still handles the highs, but only the mid-woofer, which is nearest the tweeter, handles the middle frequencies. However, unlike a three-way design that rolls off the midrange driver before it reaches the bass, the mid-woofer extends right down to the bass, just like a two-way. The wrinkle here is that the lower woofer also works in the bass, which is like a three-way. The benefit is that you get two drivers working in the bass, which delivers low end more like a three-way than a two-way, but you still have a fairly simple crossover, which is more like a two-way (although care must be taken in how the bottom woofer is rolled off at its upper limit so that it doesn't interfere with the mid-woofer that extends to the tweeter, but that's another story). 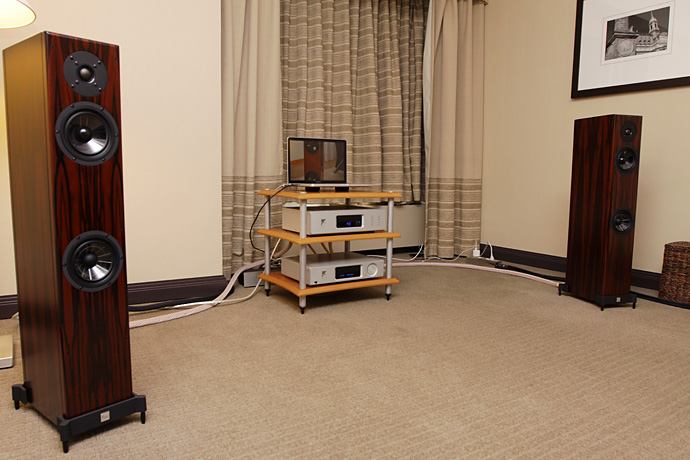 So that's how a two-and-a-half-way works, but what about the sound? In Montreal the Mozart Grand SEs were used with a 60Wpc Ayre AX-7 integrated amp ($3500) and an Ayre DX-5 universal player/DAC ($9950). The interconnects and speaker wire were from Shunyata Research, while the power cords were from Shunyata and Nordost. The resulting sound was exquisitely refined from top to bottom, with decent bass extension for the size of room, a surprisingly transparent and detailed midrange, and delicate and effortless highs. The sound wasn't quite as rich as what I heard from Joseph's two-and-a-half-way Perspective, but I didn't expect it from the Mozart Grand SEs, which are about one-third the price. For their price, the Mozart Grand SEs sounded great. 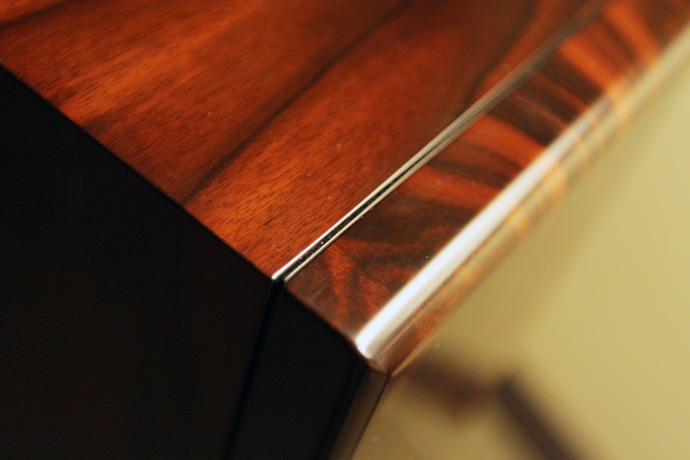 They also look Fantastic -- yes, with a capital F. I want to emphasize that because the fit 'n' finish of this speaker is as impeccable as it is gorgeous. You rarely see the quality of workmanship that the Mozart Grand SEs exhibit on speakers three times their price. I asked the folks from Vienna about how they're built and expected to hear something about outsourcing to the Far East. They told me that skilled craftsmen in Europe do all of the work, but they kept the name of the company that does their woodworking close to their vest. It's not that they're ashamed; they just don't want others to know. They also went into great detail about parts tolerances as well as overall quality control, which includes measuring every speaker that's made and ensuring it very closely matches a reference -- an extremely important aspect of high-end speaker design that, we fear, far too many companies are omitting these days (an article about quality control will appear on SoundStage! Hi-Fi in the coming months). Frankly, I was astonished at the high quality for what can be considered a very reasonable asking price.

Two-and-a-half-way speaker designs are on a roll, and from what I could tell in Montreal, if your speaker-buying budget is in the low thousands and not tens of thousands, the Vienna Acoustics Mozart Grand SE is a speaker that you should definitely consider. In fact, we are. Right after writing this article I plan to formally ask Vienna Acoustics to send us a speaker for review. Stay tuned to the SoundStage! Network to find out what they say.