I never get tired of audio shows, just as I'd imagine test pilots or (trust me on this one) motorcycle reviewers wouldn't get bored with their work. It's just so much fun. Not so much, though, for the distributors and manufacturers who put in long hours sitting in their rooms repeatedly answering the same questions.

As I exited my room on Friday morning, bright-eyed and bushy-tailed in all my reviewerly glory, I noted that three doors down was the On a Higher Note suite, and it was open. The show didn't start for another half-hour, but Philip O'Hanlon had screwed on his bowtie a touch early -- perhaps just for me? 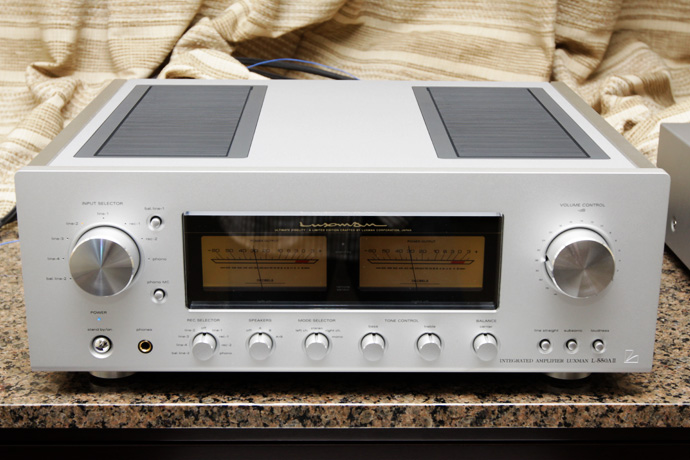 I entered and sat down in the central comfy chair for a listen. Doug Schneider went into great detail about the Vivid Audio V1.5 speakers and the Luxman integrated amplifier and CD player, all backed up by Kubala-Sosna cables, so I won't bore you with a rehash, except to mention that the Luxman integrated has an absolutely delightful '70s vibe and would look just smashing next to my lava lamp.

These relatively small, jellybean-like two-ways from Vivid Audio projected one of the best sounds I've ever heard. Where the V1.5s grabbed me was in the upper midrange and treble. Even when compared to ribbons and electrostatics, the Vivid speakers produced the most grain-free and relaxed highs I've experienced. While they've got plenty of top-end extension, the V1.5s made me settle in and let my shoulders drop as the music washed over me. No, this isn't hyperbole, but just to make sure I wasn't going over the top I brought in an expert. 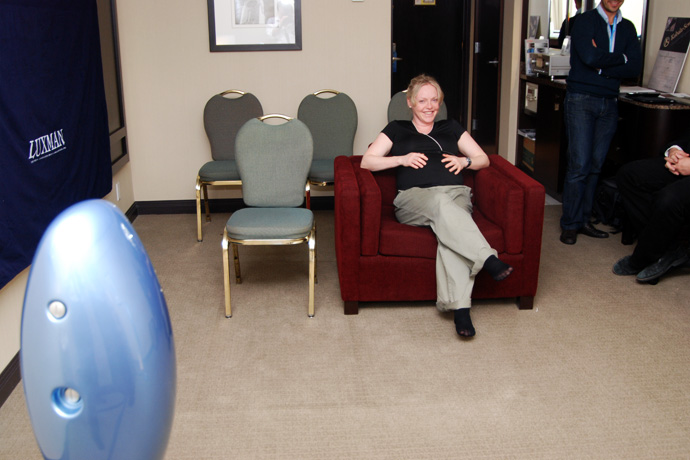 Marcia couldn't really care less about equipment, but she loves music. We rolled into the On a Higher Note room at 8:50 p.m., just before the end of the show, and Philip was as gracious as ever even though he looked tired. The long day was showing, but he smiled as I gently forced Marcia down into the sweet spot. Philip cued up Linda Ronstadt backed by the Nelson Riddle Orchestra.

I looked sideways at Marcia and noted that same sinking-into-the-music look on her face. Even from off-axis I could hear a superb sense of depth, with a layered orchestra lined up behind Ronstadt's incredibly real-sounding voice.

Next Philip played a Nat King Cole track, and the fun continued. I felt like we were looking right down Cole's throat, watching his tonsils vibrate. But don't think that this was a hyperrealistic over-the-top detail-fest. No, every aspect of the presentation was underscored with that relaxed, rich, enveloping smoothness.

The V1.5s are fairly small two-ways, so bass obviously wasn't their strong suit. But I certainly didn't notice any lack of low end, and the bass that was there was rich and satisfying.

The Vivid V1.5s retail for $7700 per pair. That's a startling bargain in my books, given how good they sound.